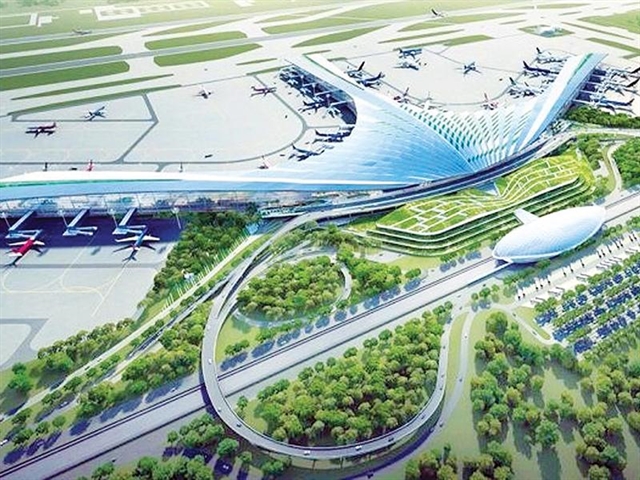 A rendering of the Long Thành International Airport plan in the southern province of Đồng Nai. Photo courtesy of Airports Corporation of Việt Nam

HCM CITY — The Government has proposed naming State-owned Airports Corporation of Việt Nam (ACV) as the main investor for the first phase of Long Thành International Airport in the southern province of Đồng Nai.

As authorised by the Prime Minister, Minister of Transport Nguyễn Văn Thể has submitted a feasibility report on the first phase of the airport at a cost of VNĐ111 trillion (US$4.779 billion) to the National Assembly (NA).

“If the proposal is approved by the NA, construction of the airport can begin in the first quarter of 2021,” said Lại Xuân Thanh, chairman of ACV.

According to the report, ACV, which runs 21 airports nationwide, will invest in the first runway, taxiways, a terminal, an aircraft parking space and other major infrastructure at the airport.

ACV will need to raise about VNĐ98 trillion ($4.19 billion) for the project. It is set to have VNĐ36.6 trillion ($1.57 billion) by 2025, or 37 per cent of the investment. It has been working with 12 domestic and international organisations to borrow the remaining at an interest rate of 5-5.5 per cent a year with a loan term of 15 years.

In addition, the Government has also proposed naming the Việt Nam Air Traffic Management Corp (VATM) as the investor of the control tower and other safety features. VATM would need to raise an estimated VNĐ3.22 trillion ($138.8 million) for the purpose.

VATM already has VNĐ2.12 trillion ($91.38 million), or 66 per cent, of the needed money. VATM would borrow the rest from local credit institutions with an interest rate of 11 per cent a year.

“We are confident that we will manage to find enough capital for the project. But there’s still a long road ahead. It will take a long time to invite bids for technical designs of the airport before construction,” he said.

In addition, the Government has proposed building two additional roads to enhance better connections between the city and the new airport.

The Government has also proposed increasing the first-phase construction area by 55 per cent from 1,165ha to 1,810ha to add more structures such as cargo storage and a cargo terminal, and to clear the area for a future second runway.

However, the total area for the airport in all phases remains unchanged at 5,000ha as approved by the NA.

Experts said that the Government should carefully consider its proposal to name ACV as the main investor since there will be no other competitors.

They said that Việt Nam should invite bids to build its largest airport instead of handing it over to a State-owned firm. The investment is far beyond ACV’s capacity, which might lead to financial risks.

Asking investors to bid for the project is a better option to ensure transparency and effectiveness in such a massive project, they said.

According to the Ministry of Transport, Long Thành airport requires careful preparations so that the project can kick off in 2021 and be completed in 2025.

The ministry has asked theVNA to issue a resolution to approve the feasibility report for the project.

The airport was approved by the NA four years ago, but funding has remained a big question, even as construction of the first phase is set to start next year.

The airport will be built in three phases over three decades, and is expected to become the country’s largest airport.

The first phase is scheduled for completion in 2025, when the new airport will be able to handle 25 million passengers a year.

Once completed, it will have an annual capacity of 100 million passengers and five million tonnes of cargo.

The three phases are estimated to cost $5.4 billion now, but experts have warned this could double if the project is delayed by five years.

Vietnamese airports served 103.5 million passengers last year, up 11 per cent from 2017, according to ACV.