BÌNH DƯƠNG — As one of the fastest-growing provinces in the southern key economic zone and among Việt Nam’s hottest investment destinations, Bình Dương is opening its doors to investors in a diverse range of fields.

Trần Thanh Liêm, chairman of the province’s People’s Committee, said: “Bình Dương Province has all the conditions needed to become one of Asia’s most attractive investment destinations. With its modern infrastructure, it has become one of the leading localities in attracting FDI (foreign direct investment) in Việt Nam.”

As Việt Nam’s emerging gateway for technology, trade and services, the province is well positioned to serve as a commercial hub for Southeast Asian economies, he added.

The province is the most vibrant business region in the country, with a growth rate 1.5 times faster than the country as a whole, according to Liêm.

Investment in a wide range of fields, including industry, trade and services, education, and human resources, is now being sought.

Just two decades ago, Bình Dương was an agricultural area with modest infrastructure, but now is the third largest FDI destination in the country, behind only HCM City and Hà Nội.

More than 3,700 FDI projects from 64 countries and territories operate in the province.

“Bình Dương is proud to host the Horasis again this year as the country aims to become an export economy that is growing rapidly and providing more high-paying jobs,” he said.

Many CEOs and investors from Southeast Asia, Japan, South Korea, India and other parts of the world have been invited to Bình Dương to look at the huge FDI opportunities there.

Horasis Chairman and Founder Frank-Jürgen Richter said that Bình Dương had sufficient “hard” infrastructure but now would need “soft infrastructure” such as more high quality human resources, and would need to continue to catch up with more developed countries in Asia and other regions.

Nguyễn Văn Hùng, chairman of Becamex IDC, noted that Horasis was one of the most important events which Bình Dương was proud to host and would be vital to the smart-city plan of Bình Dương.

According to Don Lam, CEO of VinaCapital, besides good infrastructure development, competitive labour costs, and good training facilities, Bình Dương is known for its proactive and pro-business authorities.

Bình Dương jumped from 14th in 2017 to sixth nationwide in 2018 in the 2018 Provincial Competitiveness Index from the Việt Nam Chamber of Commerce and Industry. In the southeast region, Bình Dương has surpassed HCM City and is now in first place, with a score of 66.09 points on a scale of 100 in 2018.

“The time is ripe for us to talk about Bình Dương’s potential to attract investors and investment,” Lam said. 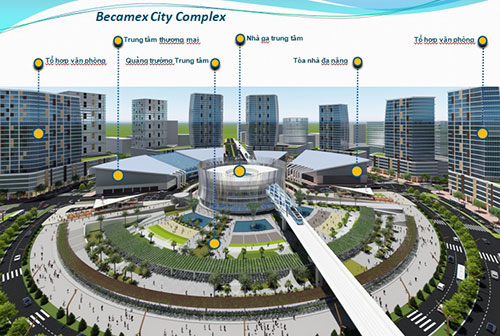 The Becamex City complex project is one of the projects included in the Bình Dương Smart City scheme. Photo courtesy of Becamex IDC Corp

Launched in 2016, the smart city scheme is a major part of the province’s “breakthrough” development programmes. Its core mission is to build interaction between the state, scientists and entrepreneurs.

To execute the project, the province has coordinated with Eindhoven City in the Netherlands, as well as the South Korean city of Daejon and the World Technopolis Association.

Bình Dương New City will be the centre of the smart province and house the most important urban areas, and research and educational institutions, as well as industrial zones.

Bình Dương Smart City is home to a growing number of Techlabs and Fablabs located in schools, universities and vocational colleges around the province. The labs collaborate closely with industrial partners and the province’s Department of Science and Technology.

Techlabs offer practical education in the latest technology, including equipment provided by industry partners. They also provide a space for joint research projects between universities and local employers.

Bình Dương’s Techlabs include a lighting lab at Eastern International University, a mechanical electrical lab at Việt Nam-Singapore Vocational College and an ICT lab at Thủ Dầu Một University, with a robotics and intelligent systems lab, a power electronics system lab, and a data analysis and artificial intelligence lab in the works.

Bình Dương also aims to join the Intelligent Community Forum (ICF) before 2021, which will allow it to link up with a network of 160 smart provinces and cities around the world.

Local agencies have been told to prioritise projects related to semiconductors and LED lighting projects, and e-government. Provincial agencies will seek more partnerships with neighbouring cities and provinces, as well as businesses and local and international experts, to help with the project.

Bình Dương was the only area in Việt Nam named as one of the world’s Smart21 communities of 2018 by the New York-based Intelligent Community Forum, a non-profit policy research organisation focused on job creation and economic development in the broadband economy. EVN to resume Quang Trach I in late 2017