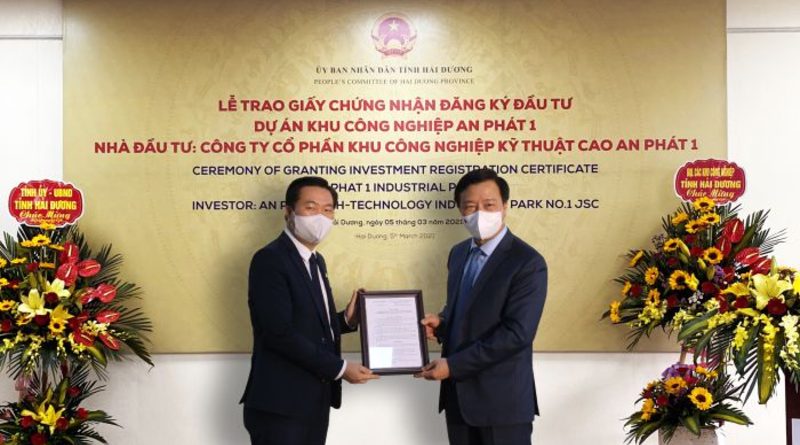 Attending the ceremony were the senior leaderships of Hai Duong. On behalf of An Phat Holdings (APH) and An Phat High-tech Industrial Park No.1 JSC (An Phat 1), there were: Mr. Pham Van Tuan – Acting Deputy CEO of the APH and General Director of An Phat 1 and the representative of Board of Directors of An Phat Holdings.

At the same time, according to the latest Decision issued today (March 5), Quoc Tuan – An Binh Industrial Park will be officially changed its name to An Phat 1 Industrial Park.

An Phat 1 Industrial Park will be built on an area of ​​180 hectares in Quoc Tuan, An Binh and An Lam communes, Nam Sach district, Hai Duong province. With a total planned investment amounted to VND 1,947 billion (~$83 million), the project’s goal is to invest in construction and commercial exploitation of the industrial park and attract high-tech and environmentally friendly investors.

Previously, on February 17, the Decision No. 212/QĐ-TTg of the Prime Minister on Investment In-principle Approval to “An Phat 1 Industrial Park Infrastructure Development” was issued.

Speaking at the ceremony, the representative of the leadership of Hai Duong shared: “An Phat 1 is a potential industrial park, with many advantages to attract investment such as strategic location, human resources, and prospect to become a promising industrial park of both size and scale. I hope that An Phat Holdings and Hai Duong Management Board of Industrial Zones will focus on site clearance, infrastructure development, together with attracting investment, building a model of high-tech industrial park, meeting the demand of high-technology industries, especially supporting industries.”

On behalf of An Phat Holdings, Mr. Pham Van Tuan, Acting Deputy CEO, General Director of An Phat High-Tech Industrial Park No.1 JSC, said: “We will strive to develop An Phat 1 into a leading high-tech, environmentally friendly industrial park in the North, a destination attracting domestic and international investment and contribute to economic and social development, promoting industrial development in Hai Duong province.”

An Phat 1 Industrial Park is projected to become a high-tech, environmentally friendly industrial park in Hai Duong, which attracts investors from many fields such as electronics, food and beverage (F&B), plastic, injection molding…

Since 2017, An Phat Holdings has expanded into the industrial real estate sector and achieved remarkable success. In particular, An Phat Complex Industrial Park after just over a year in operation was listed in the Top 10 Most Profitable Industrial Real Estate Company in 2019.

Continuing the success of An Phat Complex Industrial Park, An Phat Industrial Park 1 is expected to bring great success to An Phat Holdings in this field when the industrial real estate segment is expected to bring an average revenue of VND 600-700 billion (~$25 million) per year, average profit after tax of VND 180 billion (~$7.6 million) per year. The project implementation schedule for An Phat 1 Industrial Park is required not to exceed 36 months from the date of State allocates land. The operation duration of the project is 50 years from February 17, 2021. 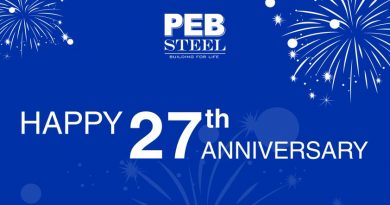 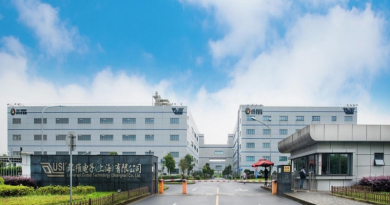 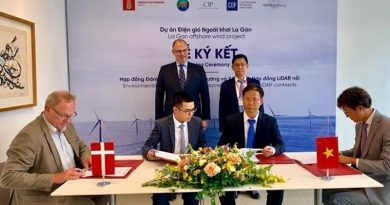