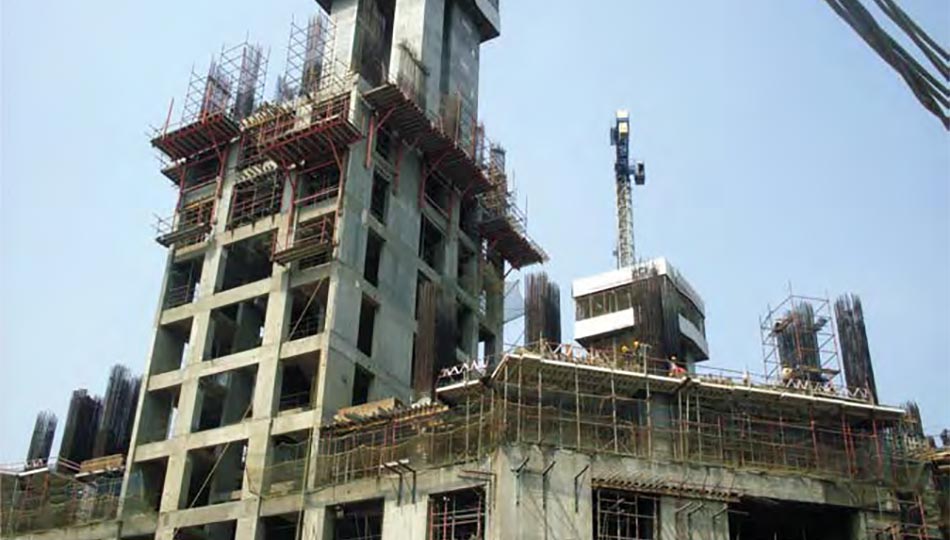 India is witnessing construction of very interesting projects in all sectors of Infrastructure. High rise structures, under construction, include residential/commercial blocks up to a height of 320 m and RC chimneys for thermal power stations extending upwards up to 275m. Majority of the structures are in structural concrete. The functional demands of such high rise structures include the use of durable materials. High Strength Concrete, Self–compacting Concrete are gaining widespread acceptance. Apart from the basic structural materials, modern projects require a variety of secondary materials for a variety of purposes such as construction chemicals, waterproofing materials, durability aids etc. The paper highlights some of the recent developments.

Concrete Design and Construction Practices today are strength driven. Concrete grades up to M80 are now being used for highrise buildings in India. However, due to escalation in the repair and replacement costs, more attention is now being paid to durability issues. There are compelling reasons why the concrete construction practice during the next decades should be driven by durability in addition to strength.

A large number of flyovers and some elevated roads extending up to 20km in length are being realized in different parts of the country and involve huge outlay of public money. However, the concrete durability is suspect. Many of the structures built during the period from 1970 have suffered premature deterioration. Concrete bridge decks built during the period now require extensive repairs and renovations, costing more than the original cost of the project. Multi-storied buildings in urban areas require major repairs every 20 years, involving guniting, shotcreting etc.

A holistic view needs to be taken about concrete durability. In this context, there are a large number of materials in the market which facilitate durable construction. Apart from the materials, the construction processes have also undergone changes with a view to improving the durability of the finished structure.High Performance Concrete

In the United States, in response to widespread cracking of concrete bridge decks, the construction process moved towards the use of High Performance Concrete (HPC) mixes. Four types of HPC were developed1:

SCC was developed by the Japanese initially as a Quality Assurance measure, but now is being widely used for concrete structures worldwide. In India, one of the earliest uses of SCC was for some components of structures at Kaiga Atomic Power Project. Many components of the structures were very heavily reinforced and the field engineers found it difficult to place and compact normal concrete without honeycombs and weaker concrete. SCC was successfully used.

SCC leaving the batching plant is in a semi-fluid state and is placed into the formwork without the use of vibrators. Due to its fluidity, SCC is able to find its way into the formwork and in between the reinforcement and gets self-compacted in the process. SCC is particularly useful for components of structures which are heavily reinforced. The fluidity is realized by modifying the normal mix components. In addition to cement, coarse and fine aggregates, water, special new generation polymer based admixtures are used to increase the fluidity of the concrete without increasing the water content.

Due to its high fluidity, the traditional method of measuring workability by slump does not work. The fluidity is such that any concrete fed to the slump cone falls flat on raising the slump cone; the diameter of the spread of concrete is measured as an indication of workability of SCC. This is called Slump Flow and is in the range of 600 – 800 mm.

Apart from the use of superior grade chemical admixtures, the physical composition of the concrete for SCC has undergone changes. The concrete is required to have more of fine aggregates and compulsorily any of the mineral admixtures – fly ash, ground granulated blast furnace slag (GGBFS), silica fume, metakaolin, rice husk ash etc. Fly ash is abundantly available as a waste product at all the thermal power stations and the Government has encouraged use of fly ash by offering them practically free at the thermal power stations. GGBFS is again a by-product of the steel mills. During the production of steel, a molten steel is poured from blast furnaces and travels in special channels, leaving the impurities on top of the stream. The waste material, being lighter moves on top and easily diverted away from the usable steel.

The diverted slag is quenched and forms small nodules. These nodules are crushed and granulated into very fine product, with particle size smaller than that of cement. The product is marketed in 50 kg bags and available economically in the regions around steel mills with blast furnaces. In other regions, additional transport cost of this bulk material is involved but its use is justified because of contribution to durability of concrete. For the concrete components of the structure for Bandra and Worli sewage outfalls in Mumbai, the German prime contractor insisted on compulsory use of GGBFS for the M40 concrete in order to improve the durability of concrete. GGBFS had to be transported from Vizag in the eastern part of India, in spite of heavy transportation cost. Since then GGBFS is finding widespread use in different parts of India for ensuring durable concrete.

The Use of Mineral Admixtures

After realization of the need for durable concrete structures, the composition of concrete has undergone changes. From being a product made of three or four materials (cement, aggregates, water), today a typical durable concrete consists of six or more materials. The use of low water cement ratio enables a reduction in the volume and size of capillary voids in concrete; this alone is not sufficient to reduce the cement based content of concrete which is the source of micro-cracking from thermal shrinkage and drying shrinkage.

To reduce the cement based content, both the water content and cement content must be reduced as much as possible. Concrete mixes with fewer micro cracks can be produced by blending the cement with mineral admixtures either in the batching plant or in the cement plant. This enhances the service life of concrete structures in a cost-effective manner.Fly Ash

Thermal power stations are left with an undesirable by-product, fly ash, in large quantities which is not able to effectively utilize or dispose of. Currently, (2009) more than 120 million tonne of fly ash are generated annually and the storage and disposal has been costing the power stations substantial unproductive expenditure. Unfortunately, all the fly ash available at the power stations is not fit for use as mineral admixture directly. Fly ash as a mineral admixture should conform to IS: 3812. Such a material is available in the finer streams of Electro Static Precipitators fitted to the power generation system.

The coarser materials are required to be processed (generally with the help of Cyclones) before being considered for use as mineral admixture for concrete. There are only a few processing units in India, including the one as Nashik Thermal Power Station. As per the Euro Code for Concrete, only processed fly ash can be permitted as mineral admixture in concrete. The code limits the use of fly ash. About 35% of cement may be replaced by fly ash; the actual percentage replacement depending on the outcome of trial mixes.