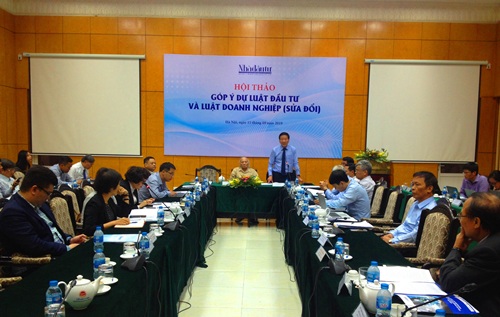 Participants at the seminar held on Tuesday to discuss the amendments to the laws of Enterprises and Investment.

HÀ NỘI – The stability of the regulatory system is key to luring foreign investment into Việt Nam and the rights and benefits of foreign investors must be assured even when policies are changed, officials and executives have said.
They urged that government agencies must acknowledge this when making amendments to the laws of Enterprises and Investment.
Though many countries and territories have entered Việt Nam, the presence of high-tech enterprises was limited, vice chairman of the Vietnam Association of Foreign Investment Enterprises (VAFIE) Nguyễn Văn Toàn said.
European and American investors were concerned by the lack of rigid policies on corporate transparency and intellectual protection, he told a seminar on Tuesday.
In addition, regulations had been changed constantly, making it harder for them to invest in Vietnamese assets, he said.
According to Nguyễn Ngọc Mỹ, chairman of Vabis Group, Việt Nam’s regulations confuse investors as they change constantly and have a negative impact on business plans whenever they change.
VAFIE chairman Nguyễn Mại said there must be a way to protect the rights and benefits of foreign investors.
“The rights and benefits of foreign investors are protected under Article 13 of the Law on Investment, however, only in the case of changed investment policies are investors asking for more,” he said.
“They want to be assured of their ownership over local assets and of the security of assets and profits when being transferred to overseas markets. In addition, they want their projects preserved if policies are changed.”
There should be a programme to make sure demands of foreign investors are met, Mại added.
Banking specialist and economist Cấn Văn Lực said foreign investors were often worried about how business licences are granted in Việt Nam and whether their cash could be transferred to a third-party territory.
Those issues were urgent as the Government wanted to make Việt Nam a financial hub and HCM City a financial centre of the region, he said.
The policy system was not transparent and consistent and it would become an issue if the Government wanted to make the business environment more open, he said.
According to Đậu Anh Tuấn, director of the legal department at the Vietnam Chamber of Commerce and Industry (VCCI), the Prime Minister has recently asked VCCI to review the regulatory system.
He said the regulations often overlapped and there were problems with ongoing projects in local areas, especially real estate, as investors had to meet different requirements and qualifications set by both local and central authorities.
The issue will lead to consequences as investors and businesses have to fulfil similar administrative works, costing them time, money and efforts and interrupting business operation.
The Government, ministries and agencies need to revise all laws and regulations comprehensively. An independent organisation must be set up to help the Government review the revised policies.
VAFIE chairman Mại proposed the Government and ministries consider an approach which does not change the right and benefit of investors based on revised laws and regulations. Companies that have benefited from former policies should not be viewed as “outlaws”.
The seminar was organised by Nhà Đầu Tư (The Investors) magazine, drawing the presence of specialists, government officials and business executives to discuss the amendment to the laws of Enterprises and Investment.