The Keppel Group held the groundbreaking ceremony this morning for Saigon Sports City, a 64-hectare site which will be developed into a smart, integrated township in the prime District 2 of Ho Chi Minh City. 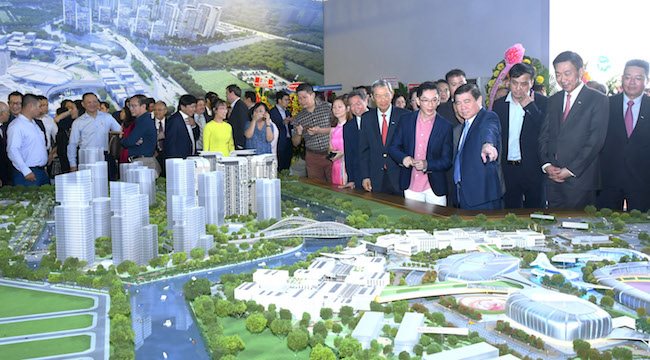 Guests take a look at the model of Saigon Sports City

When completed, Saigon Sports City will feature about 4,300 premium homes as well as Vietnam’s one-stop sports, entertainment and lifestyle hub.

Kepple claims that biophilic design principles will be adopted in Saigon Sports City, including natural cross-ventilation throughout the development, generous space between buildings for natural light, a contiguous fitness circuit, lush landscaping with locally-sourced flora and picturesque water features with natural filtration, to create a green and beautiful environment.

The first phase of Saigon Sports City will comprise residential and commercial spaces as well as sports facilities.

Loh Chin Hua, CEO of Keppel Corporation said, “Over the years, we have forged strong partnerships with the Ho Chi Minh City government and with local partners, and contributed to the city’s rapidly changing cityscape with our hallmark quality homes and commercial developments.”

“These include Saigon Centre, Estella, Palm City and Riviera Point. We are currently also developing Empire City in the Thu Thiem New Urban Area, which will be another key landmark in Ho Chi Minh City,” he added.

After this acquisition, Keppel Land holds 100 per cent interest in Saigon Sports City, thus consolidating its full ownership of the township.

This project was licensed 10 years ago but it was still on paper until the first quarter of last year when Keppel Land started mobilizing a large number of workers and supporting machines to level land and constructing the road to the township.