10 tallest buildings in the world

Towering over the capital city, Taipei 101 once held the title of world’s tallest building. Credit: istockphoto
Location: Taipei, Taiwan
Height: 508 meters (1,667 feet) | Floors: 101
Public observatory? Yes | Completed: 2004
Still the tallest building in Taiwan, it held the “tallest” title for the world from 2004 until 2010. While nine other skyscrapers since then have surpassed it, Taipei 101 remains a stunning spectacle.
“This building is notable because it essentially stands alone as there are no towers of similar size nearby,” Augustin said.
Evoking the image of a Chinese pagoda, it’s built to withstand the strong earthquakes and typhoons that can hit the island. 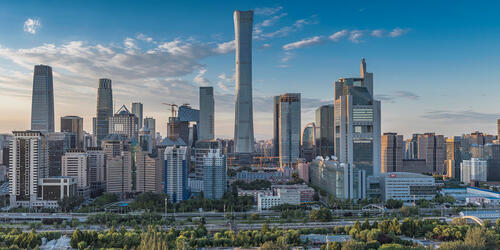 Location: Beijing
Height: 527.7 meters (1,731 feet) | Floors: 109
Public observatory? Yes | Completed: 2018
Beijing’s skyline is transformed
Also called China Zun, the No. 9 skyscraper has a memorable form with the top and bottom of the structure wider than the middle floors. The shape is patterned after an ancient Chinese ritual vessel (the “zun”).
It’s the tallest building in Beijing. Dedicated to office use, it has 101 elevators.
Augustin said it was “one of the more elegant towers” of the top 10 list. “The tapered middle section evokes the appearance of a slender vase rising into the sky.” 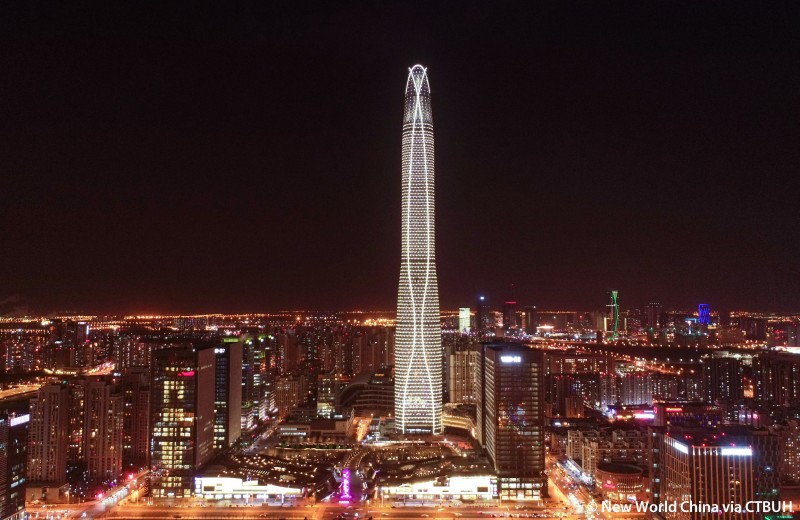 Location: Tianjin, China
Height: 530 meters (1,739 feet) | Floors: 96
Public observatory? No | Completed: 2019
Tianjin CTF Financial Centre outreaches its nearby capital city rival by a relatively small measure — just a couple of meters.
The facade of the mixed-use building (office, hotel and serviced apartments) has gently undulating curves that help minimize wind force on the structure.
Asia, and most particularly China, dominates this list, with cities and buildings many in the West may know little or nothing about.
“I would offer that skyscrapers are a symbol of economic power. And as such, they represent Asia’s ascendancy as a dominant force in the world economy,” Augustin said. Location: Guangzhou, China
Height: 530 meters (1,739 feet) | Floors: 112
Public observatory? No | Completed: 2016
Yet another entry from dominant China, the Guangzhou CTF Finance Centre is in the bustling southern port city of Guangzhou.
Overlooking the Pearl River, the building’s distinctive features include four setbacks, which allow for green sky terraces and skylights. And for now, it claims the title of having the world’s fastest elevator.
Interestingly, the architectural height of the building matches its counterpart in Tianjin. But Guangzhou CTF has a higher occupied height at 495.5 meters while the CTF building in Tianjin has an occupied height of 439.4 meters.

One World Trade Center, the tallest building in the Western Hemisphere, is seen behind the Manhattan and Brooklyn bridges. Credit: Andrew Burton/Getty Images North America/Getty Images
Location: New York City
Height: 541.3 meters (1,776 feet) | Floors: 104
Public observatory? Yes | Completed: 2014
Once the skyscraper capital of the world, New York has the lone Western Hemisphere entry on the current top 10 list.
One World Trade Center replaced the Twin Towers destroyed in the 9/11 attacks, and the footprint of its cubic base is the same of the original two towers.
For Americans, it’s a soaring symbol of resilience and has sleeker design than its boxy predecessors. And its height — 1,776 feet for the year the Declaration of Independence was signed — is no coincidence. Location: Shenzhen, China
Height: 599.1 meters (1,965 feet) | Floors: 115
Public observatory? Yes | Completed: 2017
Construction in China’s ‘skyscraper capital’ shows little sign of slowing
Shenzhen, another economic powerhouse city in southern China near Hong Kong, makes its mark with the Ping An Finance Center.
It’s a very slender building (its width-to-height aspect ratio is 1:10) with a facade of stainless steel and glass, according to TheTowerInfo.com.
This is “one of the better of the bunch,” Augustin said. “The exterior provides notable structural expression as it rises from base to top.” 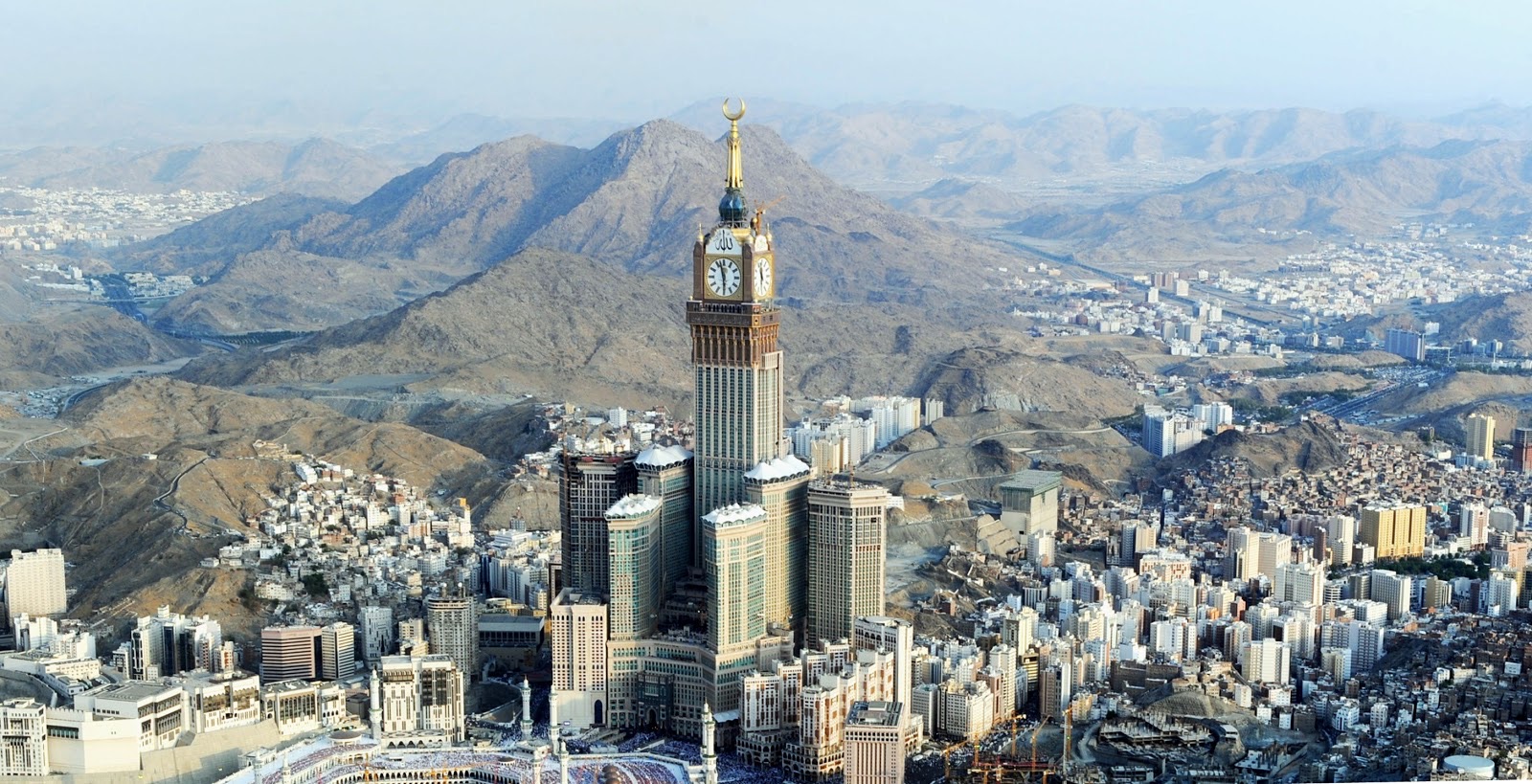 Location: Mecca, Saudi Arabia
Height: 601 meters (1,972 feet) | Floors: 120
Public observatory? Yes | Completed: 2012
The Makkah Royal Clock Tower is the most distinctive structure in the Top 10, and it’s the first of two buildings from the Middle East in the round-up.
Built in the busy center of Mecca next to the Grand Mosque, the tower offers a place for devout Muslims that make the Hajj journey.
“True to its name, four colossal clock faces are mounted near the top of the tower. These clocks hold the record for both the largest and highest in the world,” according to Skyscrapercenter.com.

Shanghai Tower soars above an already impressive cityscape. Credit: Connie Zhou/courtesy gensler
Location: Shanghai, China
Height: 632 meters (2,073 feet) | Floors: 126
Public observatory? Yes | Completed: 2015
Eight awe-inspiring spaces to see art in Shanghai
While China dominates the list, no city in China itself has a monopoly. And it should probably come as no surprise that prosperous Shanghai has the tallest building in China and second tallest in the world.
The building is visually arresting with its twisting, spiral shape headed into the sky. And that look isn’t just for show — it helps the building better withstand winds than a traditional rectangular structure.
Shanghai Tower is host to retail shops, restaurants, offices and hotels.
“Architecturally, this one is the best of the bunch,” Augustin said. “Elegant and inventive.” 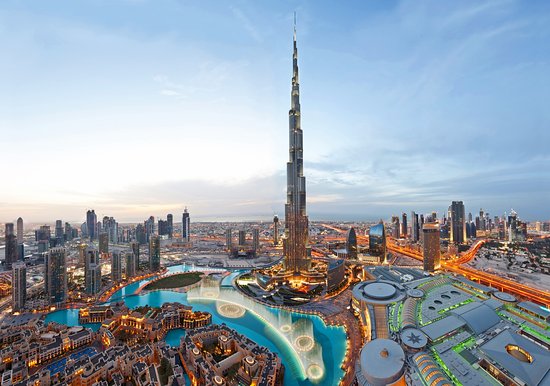 Location: Dubai
Height: 828 meters (2,716 feet) | Floors: 163
Public observatory? Yes | Completed: 2010
Like Dubai itself, the Burj Khalifa is setting the pace in the early part of the 21st century.
Blending Islamic influences with modern, energy-saving features, Burj Khalifa “redefined what is possible in the design and engineering of supertall buildings,” according to Skyscraper.com. It also connects to Dubai’s mass transit system, making it both beautiful and practical.
Augustin called it “exhilarating yet frightening at the same time. Not significant architecturally but perhaps notable as a testament to the will and ingenuity of humankind.”

The top 10 skyscrapers might not be able to hold onto their statuses as tallest for too long.
New projects are already underway, including Jeddah Tower in Saudi Arabia, which aims for a height of 1,000 meters. Completed as planned, it would immediately claim the No. 1 spot.
And Goldin Finance 117 (another Tianjin, China, effort) is scheduled to be finished in 2020. At 596.6 meters, it would claim the No. 5 spot and knock Taipei 101 off the list.
Nguồn: CNN.com